There’s very rarely such a thing as a finished casting that comes straight from the mould. There’s always some amount of finishing work before the casting can be considered a finished product. In some cases, this could be simple surface finishing, such as powder coating, anodising or alochroming. However, in the vast majority of cases, there’s excess material to remove.

This excess material comes in a number of different forms on a cast part, such as sprues, flash and runners but what are they and why are they caused? 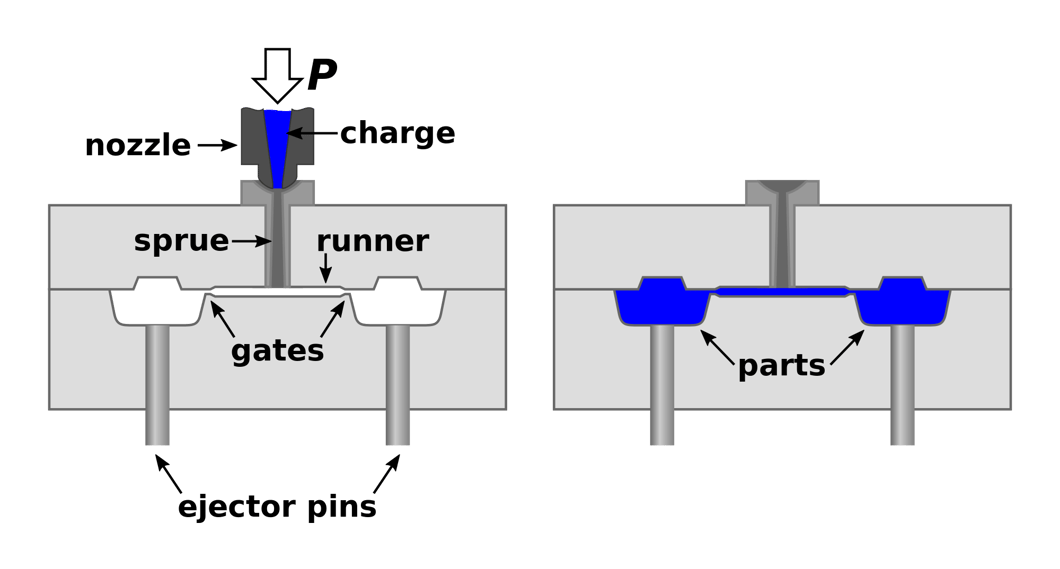 Sprues and runners are some of the largest pieces of excess material that we remove from moulded parts. They are created deliberately during the moulding process as the method in which the molten material enters the mould cavity.

A sprue is a large diameter channel through which the material enters the mould. A runner is a smaller diameter channel that directs the molten metal is directed towards the individual part (particularly common when casting multiple parts at once). The part where the metal reaches its destination and begins to flow into the mould cavity is called the ‘gate’.

Metal castings, when solid, need to have this extra material removed, however manufacturers of small plastic models most notably use these as a packaging method.

Flash or flashing is the material that is left on the casted part due to the ‘seam’ of the mould. The material enters into the seam of the mould slightly and when removed from the mould leaves a thin wafer of material attached. This is common and simple to remove with simple methods.

Whilst simple to remove and clean, great care must be taken when designing a mould to ensure that the flashing will not interfere with the function (or aesthetics, if important) of the final product. This can be particularly relevant in parts with high tolerances, friction fits or areas that require a seal. Our experienced mould designers and tool makers will work with you and your product designers to ensure that any seam lines are non-obtrusive and hidden.

Ejector pins are a mixture of the above two, they are a necessary part of most castings and can be spotted if you know what you’re looking for. Ejector pins are small pins inside the mould that are used to ‘eject’ the casting when cooled. This is because a lot of castings are hard to remove without a little help and this vastly increases the speed that automated castings can be created.

Where the pin sits in the mould and the act of ‘ejecting’ the casting can leave a small imperfection, similar to flash, on the surface. These simply require a small surface finish to remove and at MRT we ensure that ejector pins are minimal and positioned discretely.

Finally, risers are arguably the most interesting of the extracurricular parts that you might find within a metal moulding. They are specifically and precisely placed inside the mould attached to the cavity and helps prevent shrinkage. It’s essentially a large reservoir of molten material that is designed to solidify after the casting. If the casting shrinks and causes cavities during solidification, the still molten material can fill in the cavity and ensure a perfect casting. Risers are not necessary with high pressure die casting methods, but are often used in sand and gravity die casting processes.

Back to Listing Previous Next

Contact us today to find out how we can support you with your next project.

HOW can MRT Castings help you?

Proud to wear these badges